Canada Soccer have announced their 23-player roster for the 2022 Concacaf W Championship set to be played in Mexico this July. Currently in Toronto preparing for a home send-off match this Sunday 26 June at BMO Field, Canada Soccer’s Women’s National Team will have a chance to qualify for both the FIFA Women’s World Cup Australia & New Zealand 2023 as well as the Paris 2024 Olympic Games through this summer’s Concacaf W Championship.

“Selecting the 23 players was incredibly difficult and I think the quality of the players who did miss out speaks to the overall quality of the group,” said Bev Priestman, Canada Soccer’s Women’s National Team Head Coach. “Four of the five additions to the squad from last summer have all had experience at Concacaf or FIFA tournaments which is great. Now it’s about shifting gears from selection to connecting as a team and continuing to work on the little things that best prepare us to kick off in Monterrey.”

The 2022 Concacaf W Championship will feature eight nations competing in Monterrey, NL, Mexico from 4-18 July. Canada has been drawn in Group B along with Costa Rica, Panama and Trinidad and Tobago while Group A features USA, Haiti, Jamaica and host Mexico. The group stage will play played from 4-11 July with the semi-finals scheduled for 14 July and the Concacaf Final for Monday 18 July. The Concacaf W Championship doubles as both the qualification route for the FIFA Women’s World Cup Australia & New Zealand 2023 as well as the Paris 2024 Olympic Games. 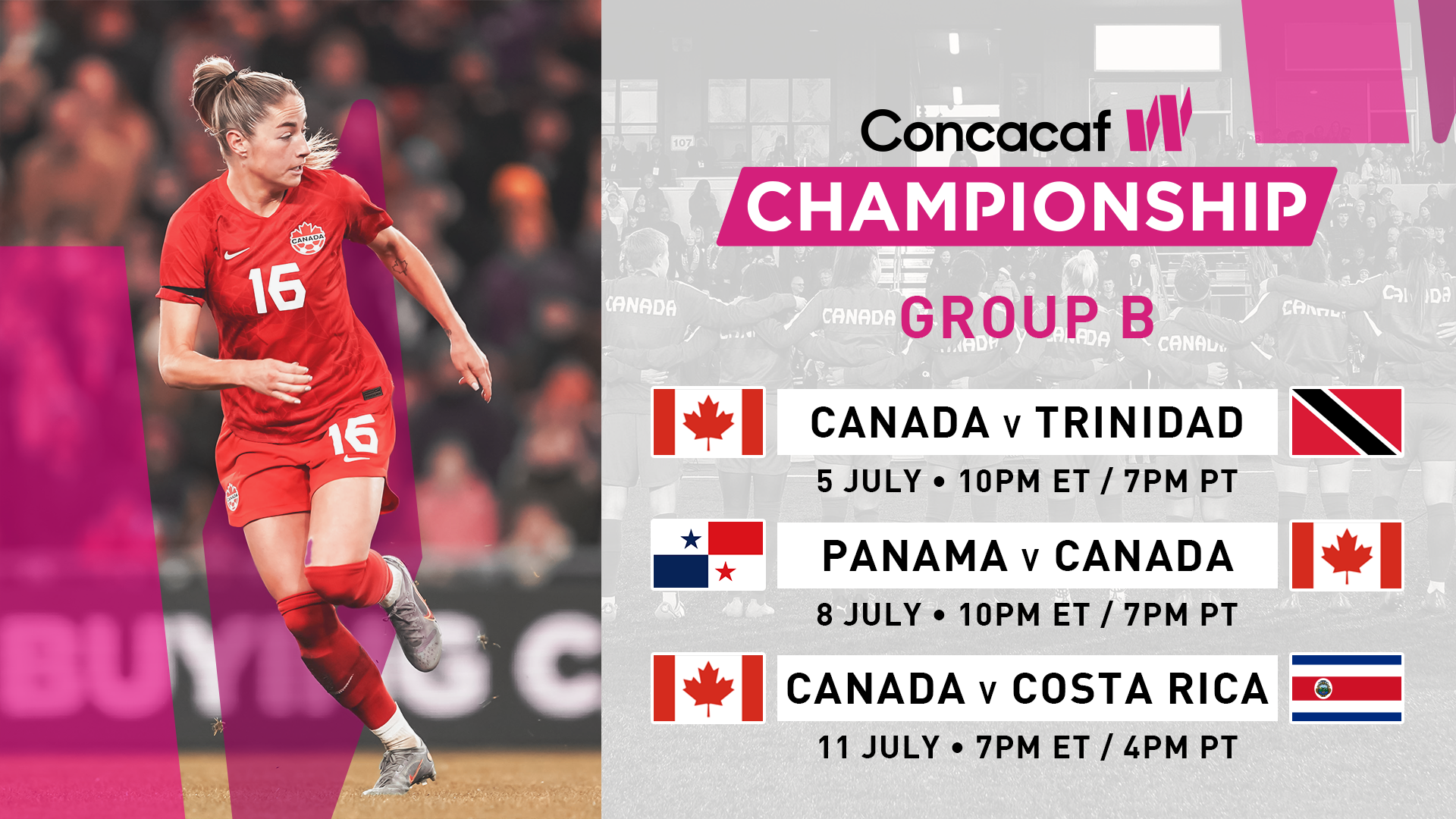 Tickets are still available via Ticketmaster.ca for Sunday’s competitive international match against Korea Republic at BMO Field. Both the Sunday match as well as the Concacaf W Championship will be broadcast live on OneSoccer, available as a linear channel on Telus’s Optik TV(Channel 980) as well as online at OneSoccer.ca, through the OneSoccer app and on the fuboTV Canada platform. The Sunday match will also be broadcast internationally on Fox Sports Plus (live) and Fox Sports 2 (next day delayed in prime time – 60m+ TVHH), Flow Sports in the Caribbean, HiSportsTV in Mexico, BT Sport in the United Kingdom and the Republic of Ireland, and SkySports in Korea Republic. Fans will find extended coverage for the matches across Canada Soccer’s digital channels on Facebook, Instagram, Twitter, and YouTube featuring the hashtag #CANWNT.

Canada are coming off a very successful 2018 Concacaf W Championship where they went undefeated posting a +23 goal difference in the opening four games before losing to USWNT in the final. Adriana Leon finished second in the golden booth race with six goals while Jessie Fleming and Quinn were named to the Best XI of the tournament.